Lee Morgan along with a combination of legendary musicians contributed together to produce 7 very significant albums in the middle of the ’60s. These “musical pioneers” achieved this feat in only two years, 1965 and 1966! Although Lee Morgan lived and was part of our lives for only 33 years, he managed to record more than 30 albums. He came into the Jazz scene at the tender age of 17 and became one of the best and most liked Jazz trumpet players in the history of Jazz music. By 1965 he was already established as one of the hottest and well-received Jazz performers, along with the others who had participated with him in these 7 recordings (Wayne Shorter, Herbie Hancock, McCoy Tyner, Billy Higgins, Joe Henderson, Jackie McLean and more). Just by taking a quick look at Lee Morgan’s discography, you can see that the immediate albums he previously recorded in 65′ were giant hits, “Search for the New Land” and especially “The Sidewinder” put him on the pedestal level. Not to mention, his sideman contribution with Wayne Shorter on “Night Dreamer” in 1964. We all know that each and every recording of Lee Morgan is a “Classic,” he was a prolific recording machine, just take a closer look at that discography link and concentrate a bit more on the specific years the recordings were made.  In the late 50’s he had accomplished the same feat with numerous back to back recordings but more with the aid of the older already established Jazz legends like Art Blakey, Benny Golson, Hank Mobley, Art Taylor, Wynton Kelly, Paul Chambers and so on. Besides his extraordinary trumpet playing, he was composing the same at the same pace. He had it all going his way and could now breakout of this so-called “showcase” role he was in. The ’60s came in and Lee Morgan turned the corner, now he would have more control of his destiny. Just try to digest this, in 1965 and 1966 he not only led in the recording of these 7 gems featured here but also managed to take part in an additional 10 recordings as a sideman, WOW!

“The Rumproller”: After trumpeter Lee Morgan set the music world on fire with the runaway success of his hit soul-jazz single “The Sidewinder” in 1964, many artists tried to duplicate his triumphant feat in search of another boogaloo sensation. Even Morgan himself cooked up funky follow-ups using “The Sidewinder” recipe including “The Rumproller,” which was recorded the next year. Beyond the groovy title tune (which was written by Andrew Hill) the quintet featuring…Learn more

“The Gigolo”: The Gigolo’ is a truly unsung album for anyone who may be interested in checking out some classic sixties jazz hard bop music. ‘Yes I Can, No You Can’t’ opens the album with the rhythm section laying down a deep groove. Morgan enters the frame with a swaggering and confident solo. The track takes on a mean and moody feel, more raw and raucous than his previous chickenshack opus, ‘The Sidewinder’. ‘Trapped’ is a bright, straight ahead minor blues which is more urgent than the opening track and has a great feel about it. It is a conventional hard bop track which is reminiscent of Morgan’s work with the Jazz Messengers. ‘Speedball’ is another bop-style blues, but….Learn more 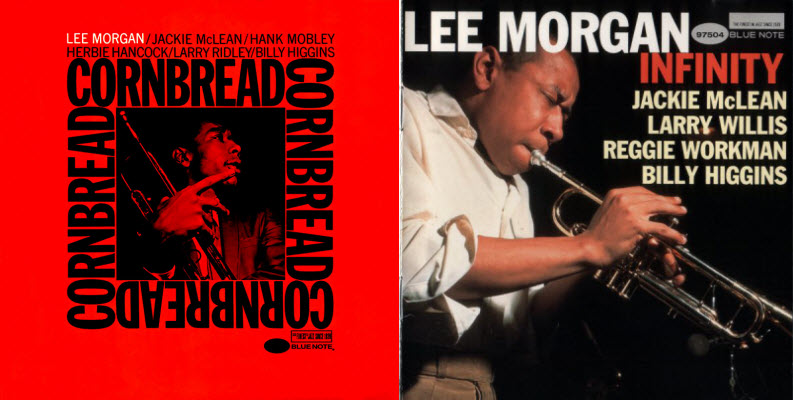 “Cornbread”: A rock-solid sextet session from the mighty Lee Morgan – recorded for Blue Note at the height of his mid-60s powers, and carried off in a beautiful blend of soul jazz and some slight modern touches. The group here is top-shelf all the way through – Jackie McLean on alto, Hank Mobley on tenor, Herbie Hancock on piano, Larry Ridley on bass, and Billy Higgins on drums – the last two of whom do a great job of bringing some complex yet swinging rhythms to the set. The horn soloists are all as sharp as you might expect – and the album’s a striking soulful date from McLean at a time when he was mostly going out a bit more….Learn more

“Infinity”: It’s pretty amazing that Lee Morgan’s Infinity album sat in the vaults for so long before seeing release.  In an effort to duplicate the success of The Sidewinder, Lee Morgan was making a lot of recordings in the mid-1960s.  His reputation is that he was something of a hard bop reactionary.  And I suppose that the 60s were a unique time in that there was never again to be such a large number of musical giants performing jazz at the peak of their careers combined with a comparable level of commercial interest in the music.  The commercial decline…..Learn more

“Delightfulee”: As Lee Morgan’s career moved from hard and post-bop to soul-jazz, Delightfulee serves as a further bridge in a half-and-half fashion. Four of the seven cuts feature his potent quintet with a young and emerging tenor saxophonist, Joe Henderson, as his front line mate, McCoy Tyner ever brilliant on piano, and Billy Higgins firing up the rhythm as only the drummer could. The remainder of the date consists of tracks orchestrated by Oliver Nelson featuring an 11-piece ensemble. There are two selections that feature versions of compositions with both configurations. “Zambia” is a post-bop classic in Morgan’s repertoire, sporting a memorable, concise, no-nonsense melody line… Learn more

“Charisma”: This set (reissued on CD in 1997) was one of trumpeter Lee Morgan’s lesser-known Blue Note recordings but it is quite rewarding. The notable sextet (which also includes altoist Jackie McLean, Hank Mobley on tenor, pianist Cedar Walton, bassist Paul Chambers and drummer Billy Higgins) performs originals by Morgan, Walton and Duke Pearson, including particularly catchy versions of the funky “Hey Chico” and Pearson’s memorable “Sweet Honey Bee” (which should have become a hit). The three horns, all of whom sound quite individual, each have their…. Learn more

“The Rajah”: On Nov. 19, 1966, Lee Morgan headed out to Englewood Cliffs, N.J., and Rudy Van Gelder’s recording studio with tenor saxophonist Hank Mobley, pianist Cedar Walton, bassist Paul Chambers and drummer Billy Higgins. When they arrived, the quintet recorded what I consider to be a perfect album. The songs were beautifully selected, the material was well rehearsed and the playing was pure bliss by all five musicians. Once they were done, Blue Note decided to shelve the album… Learn more