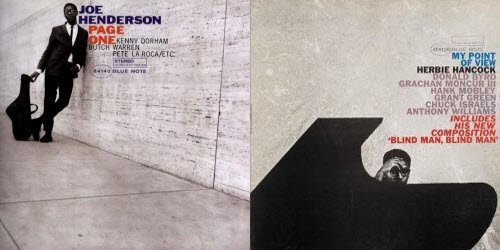 1963 was a significant year for both Herbie Hancock and Joe Henderson, as they accepted the responsibility of leading Jazz into a new decade. Their main vehicle came by way of two significant Jazz recordings that were designed to carefully bridge and blend the Hard Bop era with the desires of an up and coming generation of “New” listeners. There was a sort of uncertainty for Hard Bop and with the exact direction it was heading to.  Most urgently, there was a need breed of very gifted young Jazz musicians who wanted to make their mark with their compositions and their arrangements. Herbie Hancock was only 23 years of age and Joe Henderson was just 3 years older when these two albums, “My Point of View” and “Page One,” were released. It was Herbie Hancock’s 2nd recording as a leader and Joe Henderson’s debut album. Herbie Hancock featured seven original compositions and Joe Henderson featured four of his own. They had achieved their goal with these two recordings but they were certainly not selfish in the process, as they were just an integral part of an enormous movement that catapulted Jazz right through the 60’s and into the 70’s. In 1963 Herbie Hancock and Joe Henderson incredibly recorded an amazing 18 albums between the two of them as sidemen! Both Joe Henderson and Herbie Hancock were part of 9 recording each and performed together on two of them, Kenny Dorham’s “Una Mas” and Blue Mitchell’s “Step Lightly.” Such an incredible feat by both of them and every single one of those recordings are CLASSICS! Take a look at Herbie Hancock’s discography as a sideman here and Joe Henderson’s over here. 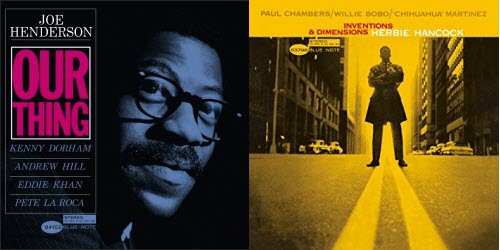 And as an added bonus, you will notice that both of them managed to sneak in a recording before the year ended, WOW! Herbie Hancock recorded “Inventions and Dimensions” and Joe Henderson recorded “Our Thing.” Along with Herbie Hancock and Joe Henderson there were major established Jazz musicians like Kenny Dorham, Miles Davis, Johnny Coles, Donald Byrd, Blue Mitchell and Lee Morgan, Jimmy Heath, Wayne Shorter, Jackie McLean, Roy Haynes, Paul Chambers, Barry Harris and a host of other brilliant newcomers, like McCoy Tyner, Grant Green, Butch Warren, Ron Carter, Billy Higgins, Pete LaRoca and Bobby Hutcherson. Jazz historians claim that 1959 was the most creative year ever and I agree very much, but 1963 was a much more important year, in respect to the continuation of growth for this musical art form and in a very difficult time of cultural change and turmoil, here in America and around the world as well. 1963 was a DYNAMITE YEAR!!

I would like to wish ALL you “Jazz Connoisseurs” and Jazz Con Class Radio fans a Happy 2020 New Year from the bottom of my heart! Last year turned out to be very productive, as the amount of listeners increased considerably and even more important, in a world wide manner. I’m so happy that Jazz…

Jazz Con Class Radio will be broadcasting through Live365 and I am very pleased with all they offer me. As for you the listeners, it will be nothing different than clicking on a different link. If you go through your browser, you will click on the new link and then save it. For iTunes listeners,…