Art Blakey and his Jazz Messengers are LIVE at Birdland’s, Ugetsu! 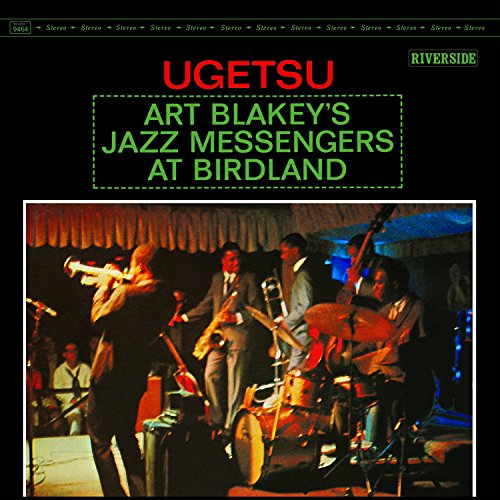 This is a very little spoken about album of Art Blakey which, in my mind, ranks right up there near the very top and to sort of create some controversy, could possibly be his best “Live” set ever recorded. This statement I’m making can be easily compared to piloting kamikaze plane because all of Art Blakey’s contributions to Jazz are considered to be over-the-top. I feel the reason why this recording is not mentioned enough simply lies on the unfamiliarity of the title, “Utgetsu.” So I did a quick search and found out that it was a highly acclaimed 1953  Japanese motion picture. Then I asked myself, why would Art Blakey name the album after this movie? The answer could be found in a very interesting and detailed article that I bumped into when connecting the word “Utgetsu” with this remarkable 1963 recording. It is on “Michael Doherty’s Music Log” where you can find it. To get to the exact article itself, just click here or the one below:

The title track opens with Art explaining that “ugetsu” is a Japanese word meaning “fantasy.” And what a fantasy. Fast-paced, upbeat, grooving – with some excellent work on horn, particularly by Freddie Hubbard on trumpet. Holy moly, some of those notes seem invented just for this song, and by his trumpet alone.

In the new liner notes written by Neil Tesser for this release, it says that “ugetsu” actually translates as “pale moon after the rain.” With that in mind, it’s easy to hear some of Cedar Walton’s piano playing as rain – or even a short burst of storm that catches folks unaware but happy. The sort of storm you want to get caught in. This track is tremendous. Cedar Walton wrote this one…….Read it all

Here’s the song “Ugetsu,” from the album (YouTube) what a beautiful song! Listen closely and listen to Art Blakey’s introduction. Make sure you go ahead and buy this album ASAP! You will find yourself listening to it over and over, it is truly a “Fantasy,” ENJOY!:

Ugetsu, a 1963 live set from the original Birdland, finds Art Blakey & His Jazz Messengers at the peak of their powers with one of their strongest lineups. The group primarily recorded sessions for Alfred Lion’s Blue Note label, but this Riverside date is as strong as any of their previous outings. Having acquired the services of trombonist Curtis Fuller in 1961, the Messengers’ front line was its most robust ever, with Wayne Shorter and Freddie Hubbard consistently turning in some of their best performances. Rounding out the rhythm section with Blakey are the equally powerful Reggie Workman and Cedar Walton. The Messengers’ set list finds the majority of tunes written by musical director Wayne Shorter, as well as a few choice numbers from Curtis Fuller and Cedar Walton’s title cut. The group is spurred on by a very receptive crowd, tempos and solos are spirited for the most part, and Blakey seems……Read More

2 Responses to Art Blakey and his Jazz Messengers are LIVE at Birdland’s, Ugetsu!