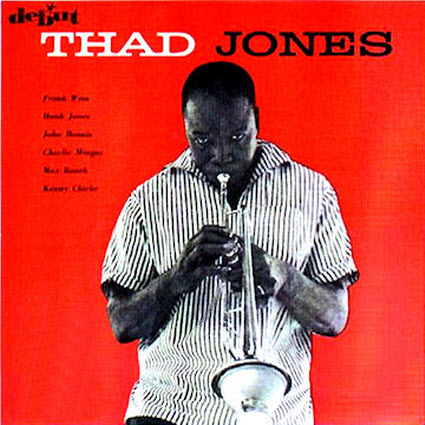 The 1955 album (Recorded in 1954),  named “The Fabulous Thad Jones” can be found, in its original form and also as “Thad Jones” and with four extra songs added to it.  The extra 4 songs were taken from this album, added to original and released, in 1956, as a compilation album and with a different album cover. “Thad Jones” was the name of this album, the image that shows on this was the new look. I recommend the Jazz Con Class Radio listeners to purchase this version, so you can get it all, in one (Available in MP3 version also). Great album, ENJOY!

Jones’ playing on this 1954 release is distinct and exciting. His compelling tone and technique instinctively evoke the dense and brassy tone of predecessors such as Fats Navarro. On the Porter classic “Get out of Town,” Jones wastes no time. After a brief Harmon-muted introduction, he breaks into startlingly forceful phrases. Jones’ blistering soloing skill is even better displayed on “One More,” an uptempo barn burner that highlights his fleshy tone and his unique musical drive…..Read More