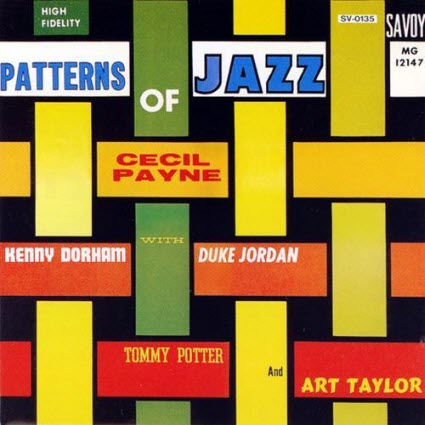 Cecil Payne is outstanding here in this straight forward early hard bop recording. He leads throughout and gives Kenny Dorham long breaks as he joins in occasionally with sweet little solos. Tommy Potter plays a loud sounding bass as Art Taylor follows along with short low quick spurts of his own. Duke Jordan is generally on the background end but successfully helps the music flow in a graceful manner. “Patterns of Jazz” is a great album to sit back and relax, not to mention, its a collectible!

This 1956 set partners baritone saxophonist Cecil Payne with the superb rhythm section of pianist Duke Jordan, drummer Art Taylor, and bassist Tommy Potter. Their performances of originals, standards, and a pair of Randy Weston compositions are unpretentious bop artistry of a high caliber. Jordan and Potter played together in Charlie Parker’s quintet of the late ’40s and are well-equipped to meet the demands of bebop. The pianist’s economical, swinging style falls somewhere between Count Basie’s and Thelonious Monk’s. Like them, Jordan is supremely skilled at saying a lot with a little. His open approach leaves plenty of space for the unassuming virtuosity of Potter and Taylor….. Read more 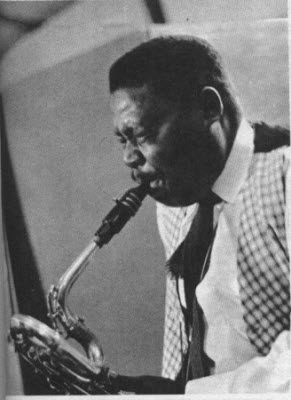 Acclaimed by peers and critics among the finest baritone saxophonists of the bebop era, Cecil Payne remains best remembered for his three-year stint with Dizzy Gillespie’s seminal postwar big band. Born in Brooklyn, NY, on December 14, 1922, Payne began playing saxophone at age 13, gravitating to the instrument after hearing Lester Young’s work on Count Basie’s “Honeysuckle Rose.” Young’s supple, lilting tone remained a profound influence throughout Payne’s career. After learning to play under the tutelage of local altoist Pete Brown, Payne gigged in a series of local groups before receiving his draft papers in 1942. He spent the four years playing with a U.S. Army band, and upon returning to civilian life made his recorded debut for Savoy in support of J.J. Johnson. During a brief stint with Roy Eldridge, Payne put down his alto and first adopted the baritone. Later that year he joined the Gillespie orchestra, earning renown for his unusually graceful approach to a historically unwieldy instrument. Payne appears on most of Gillespie’s key recordings from this period, including “Cubano-Be/Cubano-Bop,” and solos on cuts like “Ow!” and “Stay on It,” but despite near-universal respect among the jazz cognoscenti, he remained a little-known and even neglected figure throughout his career.

After exiting the Gillespie ranks in 1949, Payne headlined a session for Decca backed by pianist Duke Jordan and trumpeter Kenny Dorham. Following tenures with Tadd Dameron and Coleman Hawkins, in 1952 Payne launched a two-year stint with Illinois Jacquet, and in 1956, he toured Sweden alongside childhood friend Randy Weston. That same year, Payne also headlined the Savoy LP Patterns of Jazz. In 1957, he and fellow baritonist Pepper Adams backed the legendary John Coltrane on Dakar…….Read More

Jazz Con Class Radio
The 2020 "Let Independence Ring" Fundraiser is NEARING THE END! Please Help Fight the threat of Commercials and Ads with Your Support! Fundraiser will end as soon as the goal is met, PLEASE GIVE! LEARN MORE
Hello. Add your message here.