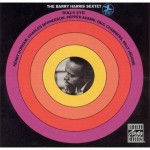 Here’s another great example of a “solid” Hard Bop recording that was done in the late 60’s. “Bull’s Eye” was recorded [...] 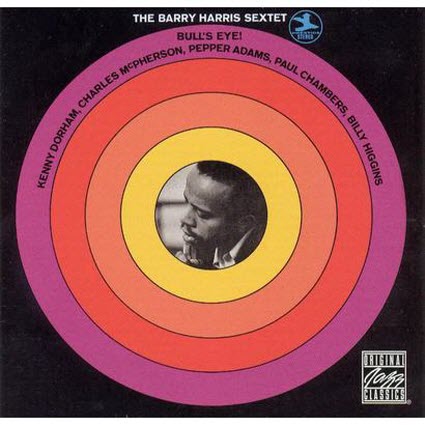 Here’s another great example of a “solid” Hard Bop recording that was done in the late 60’s. “Bull’s Eye” was recorded in 1968 and reflects Barry Harris’ originality and wittiness to follow and also create, with his fellow band members (read description below). There is another factor which involves my favorite jazz drummer, Billy Higgins and arguably the reason why Harris is able to achieve all his goals in this album. If one listens well to this album, they could hear Harris and Higgins playing together in harmony as they create all the mood changes together. Of course, one cannot ignore a great bass (Paul Chambers) backing them up in perfect rhythm. Also, it doesn’t hurt either to have a trio of legends on the horns, Kenny Dorham (trumpet), Pepper Adams (baritone sax) and Charles McPhearson on tenor, LOL!! A real killer, top-notch, true classic jazz recording! This really never ends, what a treasure of jazz, stemming from the mid 50’s to the late 60’s. All these outstanding jazz musicians, existing and recording together at the same time period. Enjoy!

In the liner notes that he wrote for Bull’s Eye in 1968, Mark Gardner quotes pianist Walter Bishop as calling Barry Harris “one of the very last of the bebop purists that we have on the piano.” Bishop knew what he was talking about; back in 1968, many acoustic pianists were choosing modal post-bop or avant-garde jazz over bop — and some were taking up electric keyboards and starting to explore a fascinating new jazz-rock-funk amalgam that came to be called fusion. But Harris, who was 38 when he recorded Bull’s Eye, was still a hardcore bebopper along the lines of Bud Powell and Thelonious Monk. On this 1968 session, the Detroit native offers no acknowledgment of ’60s trends in jazz piano — he doesn’t acknowledge McCoy Tyner’s modal post-bop any more than he acknowledges Cecil Taylor’s free jazz. And that’s just as well, because Harris is great at what he does. Unlike Tyner, Taylor, Bill Evans, Chick Corea, or Andrew Hill, Harris was always a follower rather than a leader. But again, he’s great at what he does, and on Bull’s Eye, Harris excels whether he is embracing Monk’s “Off Minor” or providing original tunes that range…..Learn More 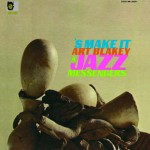 If any jazz fans were curious about the level of impact Art Blakey and his Jazz Messengers had during 1965, then they should [...] 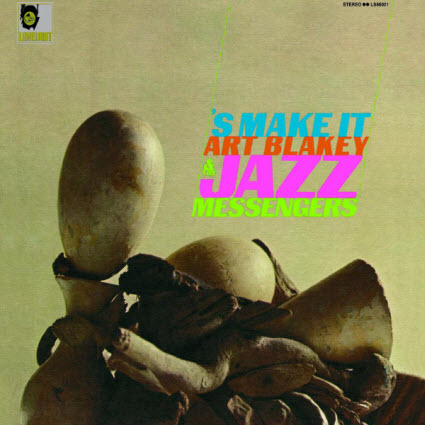 If any jazz fans were curious about the level of impact Art Blakey and his Jazz Messengers had during 1965, then they should listen to this album. “‘S Make It” which stands for “Let’s make it” was recorded in 1964 and released in 1965. The messenger band members that were with him from 1961 to 1964 (Wayne Shorter, Freddie Hubbard and Cedar Walton) had left. Art picked up some familiar musicians that worked with him in the past and added a legend tenor saxophonist and recorded this beauty. Who were they? Well, on trumpet it was Lee Morgan, on trombone it was Curtis Fuller, the Pianist was John Hicks, Victor Sproles on bass and the new addition on tenor was the one and only John Gilmore! Another classic from Blakey and with that soulful modern mid-60’s sound, sweet stuff!

The “Schedule Link” is back! 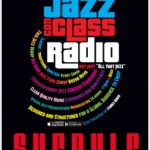 The new and official “Schedule Link” is back in order to keep all the Jazz Con Class Radio listeners informed concerning the programing. [...] 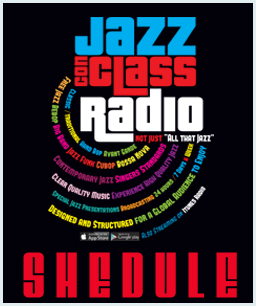 The new and official “Schedule Link” is back in order to keep all the Jazz Con Class Radio listeners informed concerning the programing. It is a monthly based schedule that lists all the playlists and the times they start. It’s more of a general view of the programing but it gives me the opportunity to add special events and there will be many of them in the future. Although I will announce it beforehand, the listeners should take a look at the schedule every day in case they miss any changes. The Jazz Con Class Radio library is hugely impressive, the daily regular’s wouldn’t tune in every day if they were hearing the same songs over and over. All the jazz on this internet radio station is high quality and there are more classic/traditional jazz tunes being added everyday. The schedule link, according to the licensing agreement, cannot announce the songs names or artists names that will be playing ahead of time and that’s why it is so general. The schedule link greatly benefit those who are interested in a certain type of playlist and helps them coordinate both the Jazz Con Class radio schedule with their own. Take a look at it here. 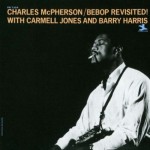 This 1964 recording was Charles McPhearson’s debut album as a leader. It was a memorable showing by this practically unknown alto saxophonist who [...] 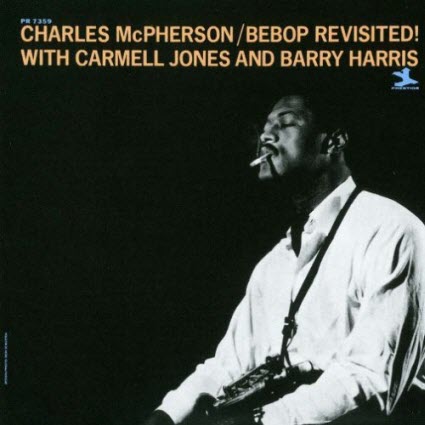 This 1964 recording was Charles McPhearson’s debut album as a leader. It was a memorable showing by this practically unknown alto saxophonist who managed to bring back bebop to life when hard bop and avant-garde was in full swing. A small reminder from McPhearson, in case somebody had forgotten the strong foundation that bebop had provided. “Bebop Revisited” is a very nostalgic type of album that serves as a rectifiable example to prove how immensely talented Charles McPhearson is. Using Bebop as the thematic approach for his debut, only helps the listener compare and easily confirm his extraordinary abilities, as he brings Charlie Parker back to life (There’s more, read biography below). Great album, get it!

Bebop is the thing on this excellent outing as altoist Charles McPherson and pianist Barry Harris do their interpretations of Charlie Parker and Bud Powell. With trumpeter Carmell Jones, bassist Nelson Boyd and drummer Al “Tootie” Heath completing the quintet, the band romps through such bop classics as…….Read More 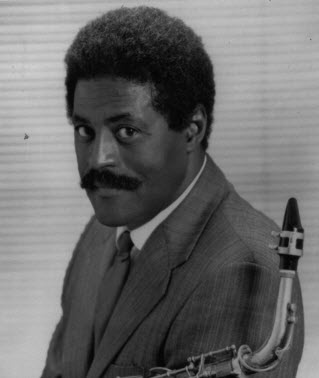 Charles McPherson was born in Joplin, Missouri and moved to Detroit at age nine. After growing up in Detroit, he studied with the renowned pianist Barry Harris and started playing jazz professionally at age 19. He moved from Detroit to New York in 1959 and
performed with Charles Mingus from 1960 to 1972. While performing with Mingus, he collaborated frequently with Harris, Lonnie Hillyer (trumpet), and George Coleman (tenorsax).

McPherson has performed at concerts and festivals with his own orchestra.

McPherson was recently featured at Lincoln Center showcasing his original compositions and arrangements with a seven piece ensemble. He has toured the US, Europe, Japan, Africa and South America with his own group, as well as with jazz greats Billy Eckstine, Lionel Hampton, Nat Adderly, Jay McShann and others. McPherson has recorded as guest artist with Charlie Mingus, Barry Harris, Art Farmer, Kenny Drew, Toshiko Akiyoshi, the Carnegie Hall Jazz Orchestra, and the Lincoln Center Jazz Orchestra with Wynton Marsalis. He has recorded as leader on Prestige, Fantasy, Mainstream, Discovery, Xanadu, and most recently Arabesque. His most recent recording is the highly acclaimed “Manhattan Nocturne”.

Charles was also the featured alto saxophonist in the Clint Eastwood film “Bird,” a biography about Charlie Parker.

McPherson remains a strong, viable force on the jazz scene today. He is at the height of his powers. His playing combines passionate feeling with intricate patterns of improvisation. Throughout his four decade s of being an integral performer of the music, Charles has not merely remained true to his BOP origins, but has expanded on them. Stanley Crouch says in his New York Times article on Charles. “He is a singular voice who has never sacrificed the fluidity of his melody making, and is held in high esteem by musicians both long seasoned and young.”…..Learn More 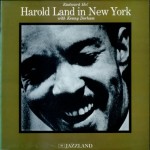 Harold Land was not known too much on the east coast, so to make his presence known he came over to New York [...] 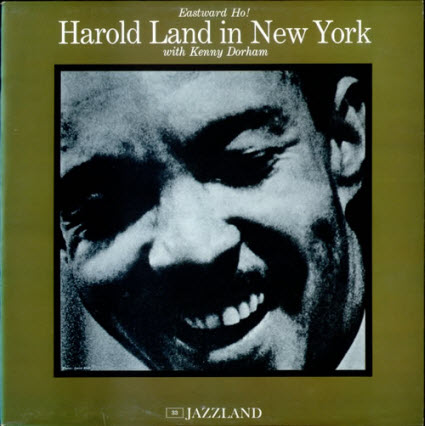 Harold Land was not known too much on the east coast, so to make his presence known he came over to New York in 1960 and recorded this album at the Plaza Sound Studio. There was no better way to express his value than to team up with the great Kenny Dorham and they made the best out of it. “Eastward Ho!” was their end product and it was a total success. Harald Land has a very distinctive sound on the tenor, a very clear and strong sound but with a soft bluesy/intimate touch to it. He could successfully matched up with the very best of them (read biography below). Great album that can rank with many other classics. 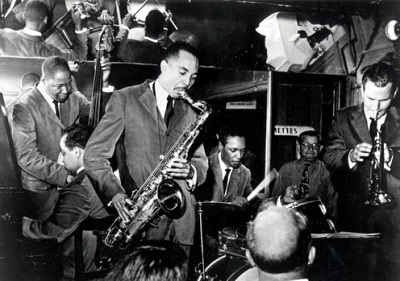 Land was born in Houston and grew up in San Diego. He started playing the saxophone at the age of 16, and by age 21, had made his first recording as the leader of the Harold Land All-Stars for Savoy Records in 1949. In 1954 he moved to Los Angeles where trumpeter Clifford Brown spotted him, and invited him to join the Brown-Roach band.

Land toured with the Brown-Roach Band extensively, and moved to Philadelphia to live with the groups pianist Richie Powell and his brother Bud Powell, but he got homesick, and moved back to Los Angeles a year before the car crash that killed both Brown and Richie Powell. He then became a regular member of another gracefully swinging west coast band, led by bassist Curtis Counce between 1956 and 1958, and with trumpeter Shorty Rogers Giants in 1961.

In 1961-62, he regularly worked with Red Mitchell, the bassist who did much to advance the early career of Ornette Coleman, and was a successful studio musician……Learn More 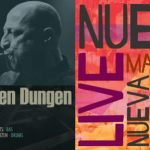 I have added two very exciting jazz bands to the “Contemporary” playlist which airs on every Saturday, learn more here. Tune [...] 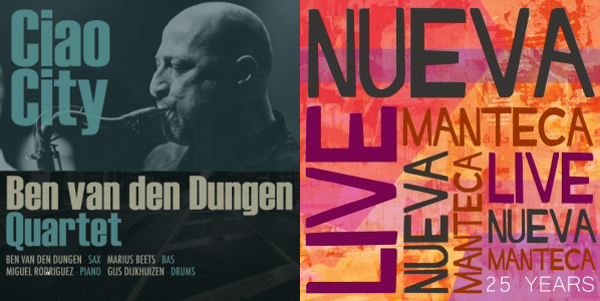 I have added two very exciting jazz bands to the “Contemporary” playlist which airs on every Saturday, learn more here. Tune in and listen to the Ben van den Dungen Quartet and Nueva Manteca, along with all the other great aspiring musicians that are featured every Saturday.

BEN VAN DEN DUNGEN QUARTET
Art Blakey once said that Jazz has to be “danceable and have the Blues” and in many ways this could be Ben van den Dungen’s musical motto for his new quartet. This quartet contains a special combination of musical personality’s.
Nothing pretentious, just swinging, right up to date and with a “happy feel”. These characteristics makes this band so undeniably 100% pure Jazz.
The new album “Ciao City” was released in 2013 and will be followed by a second one in the fall of 2014. This album will be named ‘Walkin down Blues Lane’ and will be live recorded in Cafe Central in Madrid in May 2014……Learn More

The founder of Nueva Manteca is Jan L. Hartong who started the band in 1983. In the 90′s, journalist Raul Rico of the authoritative Latin Beat Magazine, praised the group as “Europe’s finest in Latin Jazz”. Many have followed him over the years, and not without reason. The group belongs to the top of the Latin scene as can be judged from USA radio playlists which regularly show a top ranking position for Nueva Manteca’s CD’s
Nueva Manteca creates a synergy between Cuban music and Jazz music “pur sang”. The group is not “just another good latin jazz band” as there are so many these last few years, they are unique in performance, style and repertoire……Learn More