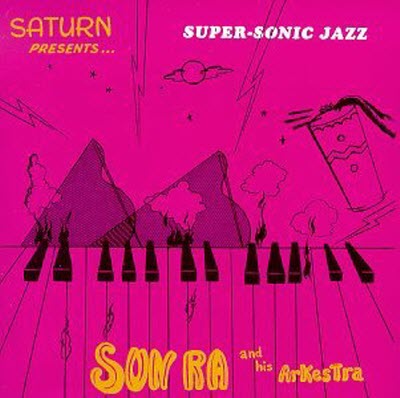 This 1956 album was out of this world! Sun Ra, a super talented pianist/composer played a big role in the Avant-Garde movement and was right there with Mingus, thinking “outside of the box” and taking risky improvised chances. The Jazz Con Class Radio listeners who never heard of Sun Ra will enjoy this mostly Hard Bop album very much but should learn more of his Avant-Garde albums that later followed. The ones who are very familiar with Sun Ra would be totally surprise to hear such a “down to earth” album from this “out of space” innovator. “Super-Sonic Jazz” is a collector’s item and every Jazz lover should have it in their collection along with all his other works. In my next to last post,  I mentioned John Gilmore, who gave Coltrane saxophone lessons, is brilliant in this album. But then again, the whole band is great. Sun Ra’s belief that he was in contact with aliens from Saturn should not throw anyone off at all (Read biography below). This album will be featured for a week or so, check the schedule link for play times.

Recorded in the RCA Studios, Chicago in 1956. Originally released on El Saturn Records (216). Includes liner notes by Tom Moon. All songs written by Sun Ra except “Soft Talk” (Julian Priester). It’s hard to believe that Sun Ra had arrived from Saturn (actually Alabama), and was leading his Arkestra as early as the 1950s. In fact, ’56’s SUPER-SONIC JAZZ is one of a few releases proving that Ra had formed his renowned ensemble and developed his utterly unique aesthetic by that time. Although Ra’s music here isn’t nearly as avant-garde as it would become, the composer/keyboardist is already intent on taking the big-band vibe of Duke Ellington into outer space, as revealed on some of these 12 stellar tracks. The sax-led “Sunology” (featuring Arkestra mainstay John Gilmore) is fairly straightforward nightclub-style jazz, while “Super Blonde” coasts along on a tight bass groove, with only a little dissonance seeping into the tune. “Advice to Medics,” however, is where the sci-fi tendencies start to become apparent, with Ra cruising along the keys of his electric piano like he’s preparing to launch into orbit…..Read More 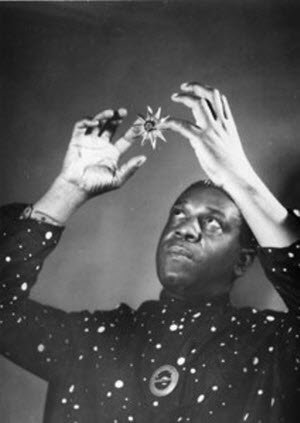 One of the towering figures of 20th century’s music, Alabama-born pianist and organist Herman “Sun Ra” Blount (1914) became the cosmic musician par excellence. Despite dressing in extraterrestrial costumes (but inspired by the pharaohs of ancient Egypt) and despite living inside a self-crafted sci-fi mythology (he always maintained that he was from Saturn, and no biographer conclusively proved his birth date) and despite littering his music with lyrics inspired to a self-penned spiritual philosophy (he never engaged in sexual relationships apparently because he considered himself an angel), Sun Ra created one of the most original styles of music thanks to a chronic disrespect for both established dogmas and trendy movements.
A pianist and arranger for Fletcher Henderson’s band when he moved to Chicago in 1946, Sun Ra started his own big band in the old-fashioned swing style in 1952. The influence of Duke Ellington (that would remain throughout his career) and Thelonious Monk were the only discernible links to the rest of the human race. The Arkestra, as it came to be known, relied on its three colorful saxophonists: tenor saxophonist John Gilmore (from 1953), alto saxophonist Marshall Allen (1954), and baritone saxophonist Pat Patrick (1954). The rest was filled by a rotating cast of musicians, whose main role was to bring as much “color” as possible to the music, particularly any number of percussionists with prominent tympani (but the other players too usually took shifts at playing one or more percussion instruments besides their own). Their albums were eccentric tonal excursions……Read More