Wayne Shorter’s “The Soothsayer” is featured 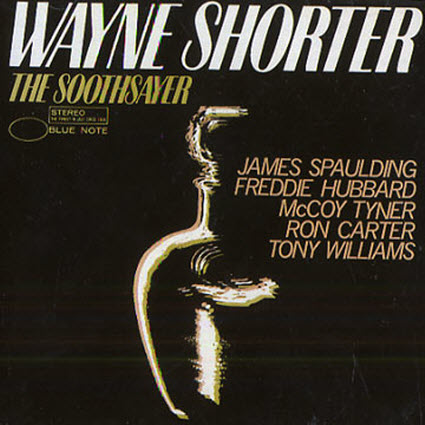 Its been for some time that a Wayne Shorter album was featured on Jazz Con Class, so I picked a real classic, “The Soothsayer.” Well, anything of Wayne Shorter is basically a masterpiece but this one in particular is considered to be one of the very first Avant-Garde albums recorded, 1965. Wayne Shorter is surrounded by musicians that had their own impact on the Avant-Garde era in the coming years and had already left an impression at a young ripe age during the Hard Bop era. I’m talking about Wayne Shorter (Tenor), Freddie Hubbard (Trumpet), McCoy Tyner (Piano), Ron Carter (Bass) and Tony Williams(Drums). I can go on adding more about this album but I’ll let it do the talking for me. There aren’t really any words to totally describe how good this album is. Soothsayer will be featured for a week or so, check the schedule link for play times.

With THE SOOTHSAYER, Wayne Shorter fronts a large ensemble for the first time in his solo endeavors. Like his previous sessions, Shorter’s assorted guests are drawn from the most notable groups of the time. McCoy Tyner from Coltrane’s quartet, rhythm-mates Ron Carter and Tony Williams from Shorter’s employer Miles Davis, and Freddie Hubbard who shared horn duties with the saxophonist in Art Blakey’s Jazz Messengers are all present, producing a huge sound lead by Shorter’s artistic vision. Also on board is alto saxophonist James Spaulding who is the perfect compliment to Shorter’s eclectic tenor. SOOTHSAYER is the fourth Blue Note…..Read More