Cal Massey? And his album “Blues to Coltrane” is featured 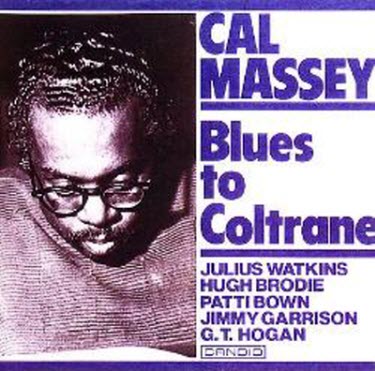 Who is Cal Massey, well let me tell you how I found out. I was sitting back/relaxing and listening to one of my favorite albums of Lee Morgan, “Lee-Way” and was looking through all the credits to see if Lee Morgan had composed any of the songs. I noticed that he had composed one of the songs, “The Lion and the Wolf” and Jackie McLean had also, “Midtown Blues” but the other two, “These Are Soulful Days” and “Nakatini Suite” had the name “Massey” listed beside them. For curiosity sake, I did a quick search on Cal Massey and learned about a very underrated and rarely mentioned trumpet player who only recorded one album as a leader but more importantly, I found out that he was a great composer of Jazz songs. I will be featuring this standalone masterpiece which was recorded in 1961, “Blues to Coltrane.” Unfortunately for all Jazz fans, this album was not released until 1987! I personally consider this to be a crime and you will probably feel the same when you hear it for yourself. I’m glad that I was able to find out more about Cal Massey and will be more than honored to share this album play with the Jazz Con Class listeners. Check the schedule link for play times, enjoy!

Recorded in 1961, but not released until 1987, BLUES TO COLTRANE was the only recording session Massey led. Cal was one of the unsung heroes of jazz, not even rating a mention in “All Music Guide,” but recognized by connoisseurs as a master of beautiful, melodic and soulful trumpet playing. This belated first release of an album recorded almost half a century All songs written by Cal Massey. Recorded at Nola Penthouse Sound Studios, New York on January 13, 1961…..Read More

There’s some doubt about the birth date of composer and trumpeter Cal Massey, with some accounts having him born on January 11, 1928. But there’s no question about his ability as a composer; Massey wrote some poignant and compelling material, and had works recorded by John Coltrane, Freddie Hubbard, Jackie McLean, Lee Morgan, Philly Joe Jones, and Archie Shepp, among others. Some Massey numbers that were cut included “Bakai” by Coltrane, “Fiesta” by Jones, “Assunta, Father and Son” by Hubbard, “Message from Trane” by McLean, and “Cry of My People” by Shepp. Massey studied trumpet with Freddie Webster and worked in big bands led by Jay McShann, Jimmy Heath, and Billie Holiday….Learn More