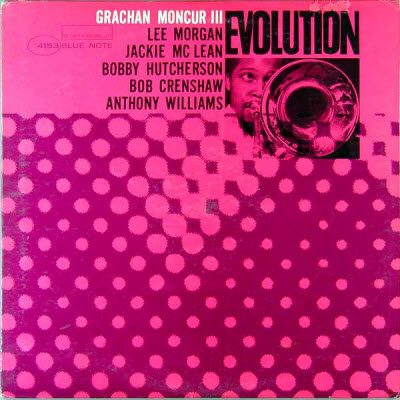 The album “Evolution” is another great album and example of the beginnings of Avant-Garde. This album and the previous one that I featured, “Point of Departure” are very similar in their presentation but with more hard bop involved since Jackie McLean and Lee Morgan were involved. Check the schedule link for play times, enjoy!

Grachan Moncur III was (along with Roswell Rudd) the premier trombonist in the American 1960’s jazz avant-garde. Moncur’s style was of the times–gruff, mercurial, and urgent. Yet 1964’s EVOLUTION is one of those Blue Note albums where hard bop and the avant scene overlap. The lineup is a who’s-who of the label’s best: drummer Tony Williams, altoist Jackie McLean, and vibraphonist Bobby Hutcherson, performers mostly known for straight-ahead styles but who also dipped into freer waters when called upon. EVOLUTION is all original Moncur compositions, which inspires these players to really push the envelope (especially McLean who always shone with the trombonist). 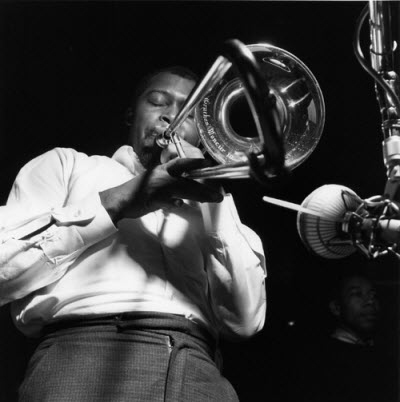 Grachan Moncur III was born in New York City at Sydenham Hospital on June 3, 1937 into a musical family that included his Uncle Al Cooper, leader of the Savoy Sultans, and Grachan’s father, Grachan Brother Moncur II who played bass as a member of Savoy Sultans. His father also played with such notables as Billie Holiday, Diana Washington, and pianist Teddy Wilson among others.

Grachan’s early musical studies started at Laurinburg Institute under the musical direction of Frank H. McDuffie Jr. and Phillip Hilton, a very advanced trombonist and student. His trombone playing began with the all-state marching band and he eventually became a member of the jazz combo. He rapidly moved forward to become leader of the Laurinburg Jazz Septet, and musical director of Laurinburg’s traveling musical revue that included singers, dancers and a variety of talented performers.

After graduating from Laurinburg Institute he attended the Manhattan School of Music and the Juillard School of Music. While achieving academic training he also performed as leader and co-leader with various groups that included such stars Wayne Shorter, Gary Bartz, and Blue Mitchell along with jamming at jazz spots such as Birland, the Open Door; The Five spot; Turbo Billage; Cafe Bohemia and Count Basies. Grachan continued his career with fabulous Ray Charles Orchestra. He worked with the group from 1959 until 1961. At a Ray Charles show at the Apollo Theatre which included the Jazztet, Grachan’s outstanding solo performances were observed by Benny Golson and he was immediately recruited as the trombonist into the Art Farmer/Benny Golson Jazztet. He performed with the Jazztet until it disbanded in 1962.