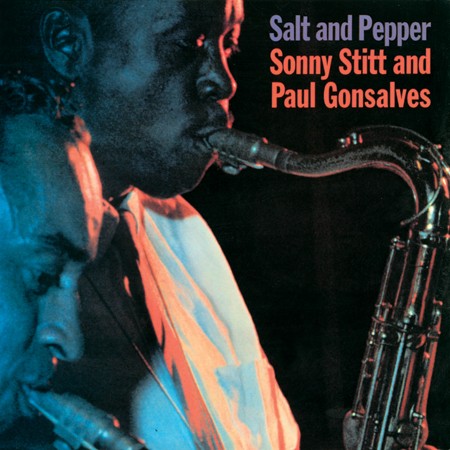 “Salt & Pepper” is a clear indicator of how talented Sonny Stitt was and is also another example of how long the Hard Bop era extended well into the early 60’s. It’s a energy loaded, straight forward album with a great cross-firing saxophone play by Stitt and Paul Gonsalves. Very enjoyable to hear them play together in a challenging but very supportive manner. Excellent drums and bass playing is necessary in order to keep up with the speed of these two giants and Milt Hinton (bass) along with Osie Johnson (drums) are right on cue. It sure doesn’t hurt either to have Hank Jones on the piano. Great stuff, check the schedule starting tomorrow Monday, October 15th for play times. It will be featured for a week or so and then place on the rotation, enjoy!

This 1963 Stitt-Gonsalves encounter should be better known than it is. Stitt, of course, was one of the most prolific recording artists in jazz (nine albums in 1963 alone!), while Gonsalves although heard widely with Duke Ellington infrequently recorded as a leader. On tenor, as on this track, Stitt combined Charlie Parker and Lester Young influences, whereas Gonsalves came more out of the Coleman Hawkins school, with a “modern” harmonic approach that once led Dizzy Gillespie to hire him. Their contrasting styles and combative natures make for absorbing listening on the spirited title cut.

The extended blues workout “Salt and Pepper” starts with the two tenors enthusiastically alternating fragments of the theme. Gonsalves then embarks on a solo that lasts a mere 13 choruses, just about half the 27 he so famously played with Ellington at Newport in 1956 during “Diminuendo and Crescendo in Blue.” His phrases here are reminiscent of the memorable ones he played at Newport seven years earlier, as Osie Johnson maintains a driving beat similar to Sam Woodyard’s back then…….Learn More