From the monthly archives: "September 2012" 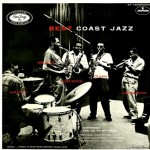 This is a very interesting album that all Jazz enthusiasts will love and most importantly, will help the curious beginning listeners who are [...] 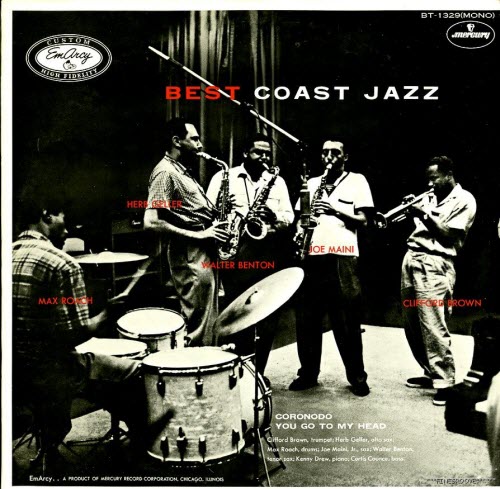 This is a very interesting album that all Jazz enthusiasts will love and most importantly, will help the curious beginning listeners who are interested in understanding the format behind Jazz music. In general, Jazz music is based on improvising but has a sort of order when it is delivered. A Jazz band usually starts off together as a group, in order to set forth and help the listener identify the actual song they will be playing. Then each member takes his/her turn leading the band, improvising as freely possible but not venturing away too far from the actual song. The song can be as time consuming as the band members wish but with the sole intent of spiritually allowing the listeners to expand their minds to wherever they like to take it, this is the beauty behind Jazz. After all these amazingly talented musicians are done with their contributions, then the whole band reunites, full-circlereverting back to the beginning theme they started with. This album here is a perfect example of the unique musical format Jazz offers and also the reason why I decided to feature it. The name of the album is “Best Coast Jazz” and will be featured on Jazz Con Class for a couple of weeks. Afterwords it will be released into the rotation and placed in the Hard Bop playlist. This particular album consists of only two song, both very long. Check the schedule link for play times, ENJOY!. 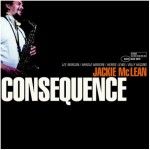 “Consequence” is basically and educational Jazz album that will take you back to 1965 and to where this country was in [...] 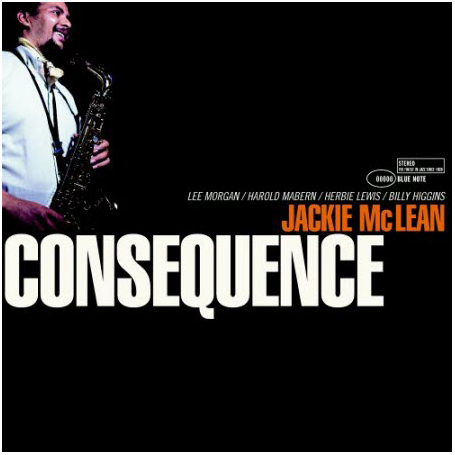 “Consequence” is basically and educational Jazz album that will take you back to 1965 and to where this country was in a transition. Many social issues were being challenged and Jazz music was adjusting to these changes also. One can clearly hear a combination of both Hard Bop and Avant-Garde, not to mention the highest quality of musicianship. Both Jackie McLean and Lee Morgan were in their prime and along with dynamic drummer Billy Higgins and company, they were simply dynamite. Music listeners use the term “Tight” to describe the ability for a band to play in perfect unison, no matter the speed they play, fast or slow. This band consisted of very unique individuals but with the least arrogance to disrupt or change each others goal. This album is perfect example of a “Tight Band.” Checkout the schedule link to find out more about the play times, ENJOY!

This 1965 session pairs Jackie McLean with Lee Morgan in the front line and features a rhythm section of pianist Harold Mabern, bassist Herbie Lewis, and drummer Billy Higgins. Right — a powerhouse band. Originally recorded in 1965, it wasn’t released on LP until 1979, and then on CD as part of the Mosaic box set (The Complete Blue Note 1964-1966). This is its first release as a separate title on CD. The music here is much more straight-ahead than on other McLean dates from the 1960s. The presence of Morgan puts McLean in the position of having to be at his best, as on the stellar opening cut, “Bluesanova,” which combines bossa, soul-jazz, and hard bop. Another tight moment on the set is McLean’s “Tolypso,”….Read More 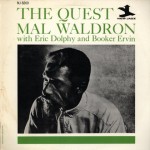 This album will teach the listener a lesson of precise musicianship and most importantly, can be considered as a perfect example of the [...] 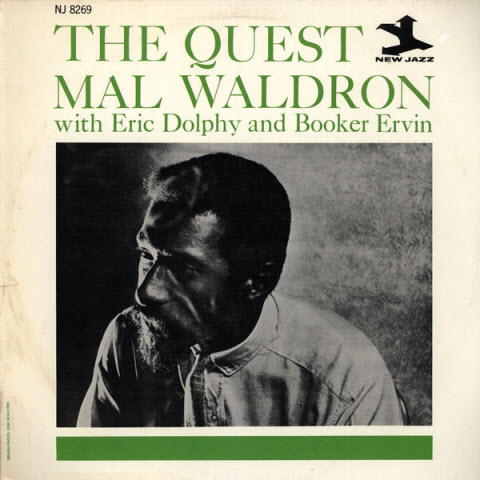 This album will teach the listener a lesson of precise musicianship and most importantly, can be considered as a perfect example of the unique listening experience that Jazz music offers. When you have such a high quality of superstars (Eric Dolphy, Booker Ervin and so forth) with such an abundance of improvising, the results are incredibly enjoyable. This album exemplifies the best quality of music that anyone can hear. “The Quest” is a classic album and will be featured for about two weeks until it is let loose with the rest of the “High” quality that Jazz Con Class offers. Check the schedule link for play times. Only the best for the listeners here, ENJOY!

Quest songs This wonderful and luxurious set of seven Mal Waldron compositions is played by a sympathetic and inventive sextet. Quest album The featured soloists are saxophonists Booker Ervin and Eric Dolphy (also on clarinet). Quest CD music The rhythm section is bolstered with the presence of Ron Carter on cello, whose sonic range dances fluidly between the tamper of the reeds and the bottom of Joe Benjamin’s bass. Quest music CDs

“Warm Canto” is a gorgeous and pastoral work that brings to mind classical composer Ferde GrofT. Quest songs Elsewhere–such as on the post-bop frolic “Warp and Woof”–Dolphy and Ervin alternate solos with delightful contrast and verve……Read More

Album Feature: Mingus at the Bohemia 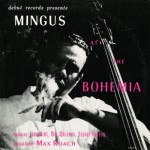 Can anyone ever possibly get bored from Charles Mingus and his innovative music. Never a dull moment from Mingus and here’s just another [...] 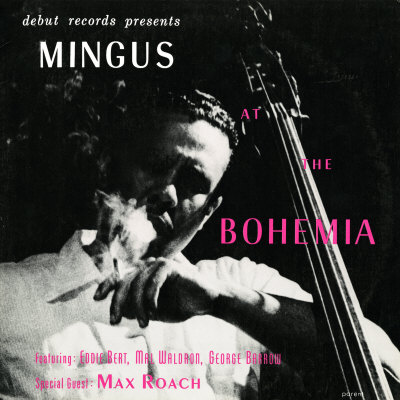 Can anyone ever possibly get bored from Charles Mingus and his innovative music. Never a dull moment from Mingus and here’s just another example. It’s a live 1955 recording from Cafe’ Bohemia, the official name of the album is “Mingus at the Bohemia.” Check the schedule link for play times. There is more from this live recording and it is located on another album. I will be featuring in the near future and will refer back to this link, ENJOY!

The songs from “Cafe Bohemia” contain the typical Mingus “Jazz Workshop” characteristics. A concert as work shop meant first of all a live experiment; this is mainly true for his “guest” musician Max Roach in “Percussion Discussion”. Mingus at the Bohemia fixed a moment in time where Mingus found his musical identity.

The first song, “Jump, Monk” is a tribute to Thelonious Monk, but has no connection to Monks music. Mingus rather tried to simulate with his bass play the dance like movements of the great musician. This composition is described by Mingus as “a profile of Monk”, not a complete picture of the man but a side view or one aspect of a complex personality. Actually, it is a double profile because we can see an important aspect of the composer, Mingus. The eight-bar, many-voiced section that keeps alternating with the melody most certainly mirrors the emotional, earthy quality found in both subject and composer. If you listen carefully to the last chorus, you will hear Mingus shout during a couple of the sections, thus bearing out the identity.

Of importance, also, are the compositional techniques used in this piece. Along with given melodic figures, the composer created the form and mood by giving the musicians scales on which they could build their own figures. These figures then had to appear in certain places and also had to maintain the mood of the composition. Listen to the first and last choruses and notice that even though George and Eddie play different notes in comparable places, the mood and feeling are still the same.

The second song, “Serenade in Blue” The compositional devices used here are diminution and agumentation. The melody is first played slow then diminished and played twice as fast. The piano augments the melody in the bridge and it sounds slow again. Once again it is diminished, or played fast, and we go into the blowing choruses.

The above mentioned “Percussion Discussion” is a duet of Mingus and Roach, which was later also used in the Epitaph suite.[2] Just two men playing two instruments that are very rarely found on the stand alone. Two men producing and assortment of rich and exciting sounds. Here is a chance to really enjoy the artistry of Max and Mingus. Notice the clean, true snare sound that Max gets on his highest pitched drum. As he moves from snare drum to tom-tom, there is no doubt that he’s changed intentionally. No muddled indistinct sound here but a real fresh, swinging sound for Max. And he has his earthly qualities too: strong, vigorous, earthy qualities. Mingus is tremendous, matching Max mood for mood. His pizzicato becomes so strong at times that it sounds very close to Max’s percussive effort. Also, for a new concept in jazz sounds, listen to the high, scraping sound Mingus gets on his bass immediately after Max’s cymbal entrance……Learn More 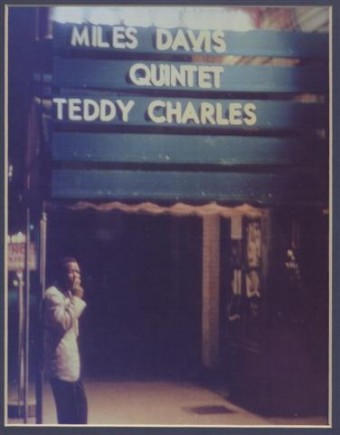 During the mid-1950s, Cafe Bohemia was one of the most happening jazz clubs in New York City, a Greenwich Village club where Manhattan’s infections art and intellectual scene thrived. On any given night a visitor might hear Charles Mingus, Art Blakey, or Kenny Dorham holding down the stage, with future cult figure Herbie Nichols taking a turn as intermission pianist.

Jazz greats frequented Café Bohemia as listeners, too — Sonny Rollins, Max Roach and Thelonious Monk among them – checking out the music in the middle of the Greenwich Village scene. Other patrons included novelist Jack Kerouac and painter Larry Rivers. Cafe Bohemia was where saxophonist Cannonball Adderley made his electrifying national-scene debut, Miles Davis got his first great group up to speed, and half a dozen standout records were made.

The style of jazz played there was progressive hard bop, often in minor key and executed at world-class levels of passion and precision…Read More