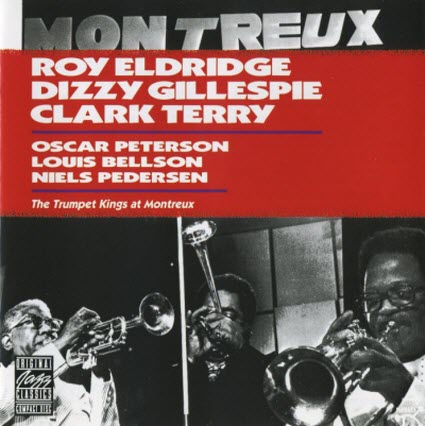 The latest Featured Album has been scheduled here and it’s a real beauty! It will be airing for a week or so and then placed in the 4G Playlist (Playlist Link). The official name of the album is “The Trumpet Kings At Montreux 1975” and has a horn section that cannot be beat, here’s more:

When it came to Roy Eldridge, Dizzy Gillespie had no greater love. “Little Jazz” was his early idol and role model, the next great brass stylist in jazz history after Louis Armstrong. At the inception of modern jazz, during the early days at Minton’s and Monroe’s in Harlem, Eldridge and Gillespie used to regularly engage in torrid cutting contests at competitive after hours jam sessions. Gillespie soon moved beyond Eldridge, and thanks to Charlie Parker, found his own voice on the trumpet. But the warm friendship and competitive edge between master and student continued on a number of Norman Granz inspired sessions. This throwdown at The Montreux Jazz Festival in 1975, featuring the innovative trumpet stylist Clark Terry and a swinging Oscar Peterson-Niels Pedersen-Louis Bellson rhythm section, has all the fire and elegance you could ask for…..Learn More