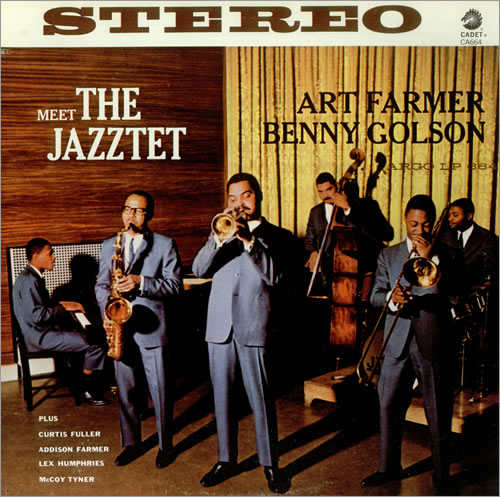 This is my latest featured album and it is a real “Sleeper.” The name of the album is “Art Farmer/Benny Golson Meet the Jazztet” and it holds up on its own with the best of them, this is why I’m featuring it. There are many albums that somehow slip through the passionate Jazz ears and are simply ignored. Perhaps it’s just bad timing or maybe bad promoting but then again, in 1960 there was so much going on with better known Jazz musicians. There was so much groundbreaking Jazz music being produced, Hard Bop was still running strong, Free Jazz was fresh and  Post Bop/ Avant-Garde was evolving. This could only be the excuse, as this stealth classic album was not seen as it traveled under the radar. I will be featuring it for a week or so and later place it in the Hard Bop playlist. Check the schedule link to see when it will be playing, enjoy!

Although this CD has the same program as the original LP, it gets the highest rating because it is a hard bop classic. Not only does it include superior solos from trumpeter Art Farmer, trombonist Curtis Fuller, tenor saxophonist Benny Golson, and pianist McCoy Tyner (who was making his recording debut) along with fine backup from bassist Addison Farmer and drummer Lex Humphries, but it features the writing of Golson. Highlights include the original version of “Killer Joe” along with early renditions of “I Remember Clifford” and “Blues March.”….Learn More